Of Fatima our path goes to the West to Batalha. 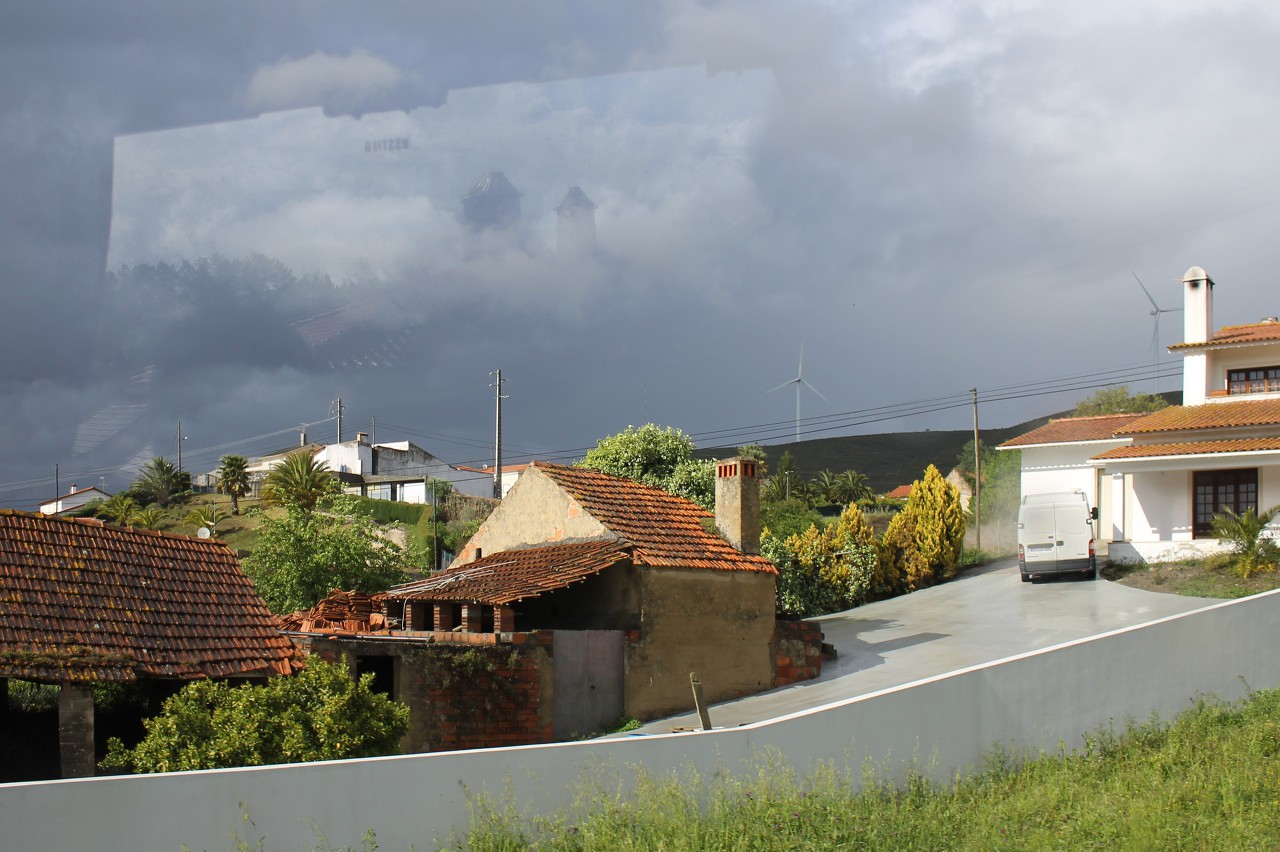 The distance between the cities is only 12 kilometers, we drove it for twenty minutes and during this time we were drenched with torrential rain a couple of times, after which the Sun peeked out. 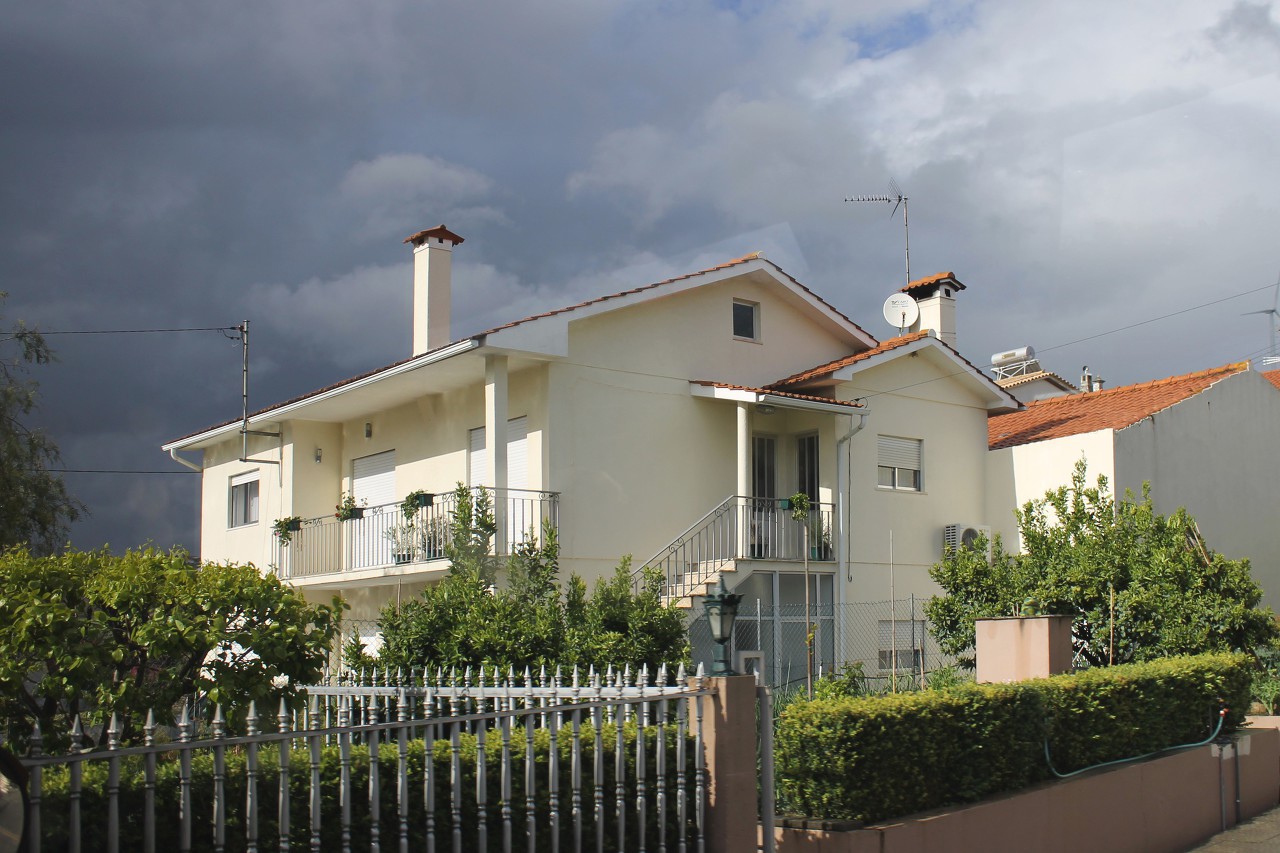 The town of batalha has seven and a half thousand inhabitants, it is a quiet Portuguese province. 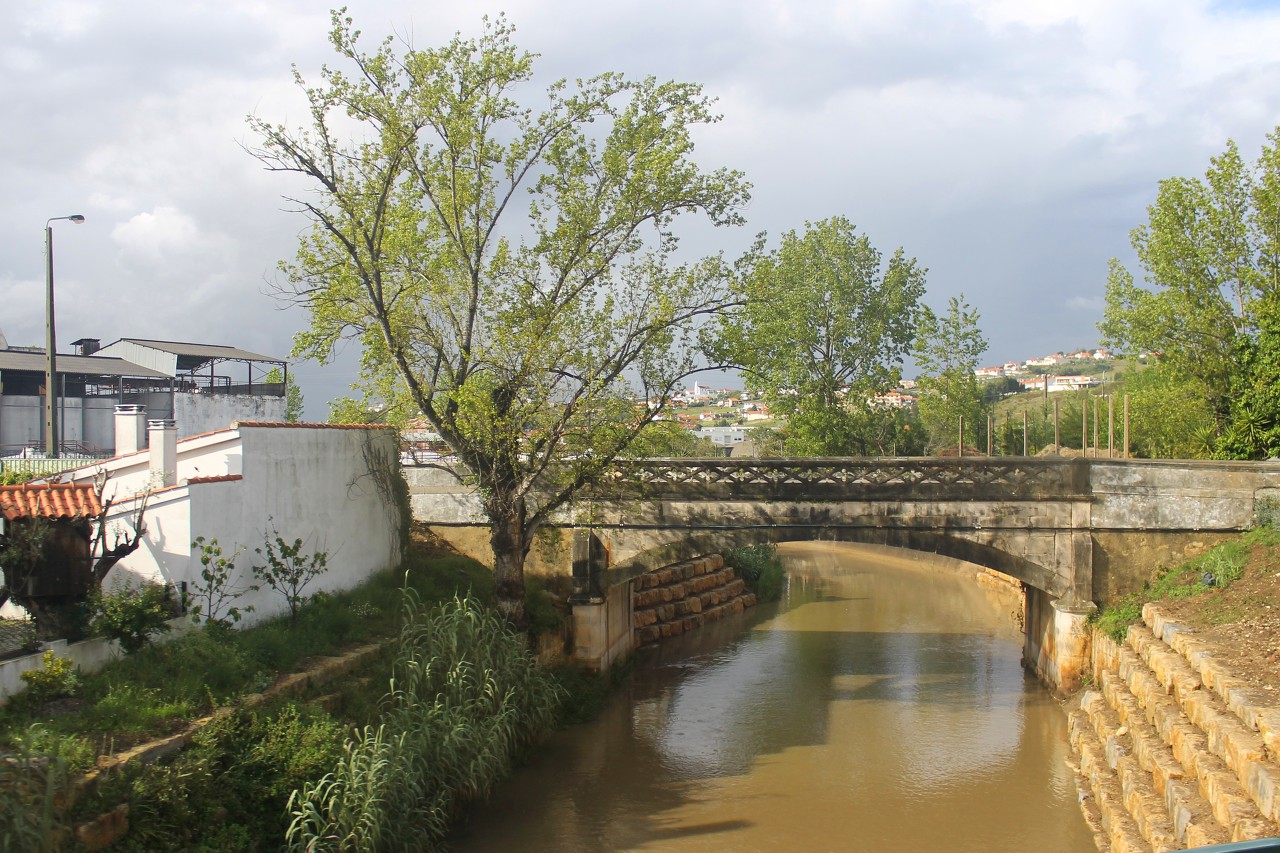 The city is famous for its wonderful monument of medieval architecture, the Mosteiro Santa Maria da Vitória na Batalha, which is often simply called "Batalha Monastery", it was built in the name of victory in the battle at Aljubarrota that occurred in 1385. This story began in 1383, when the Portuguese king Fernando I died. his only heir was Princess Beatrice, who was the wife of the Castilian king Juan I. According to the marriage contract, the wife of the deceased Portuguese monarch Leonora became Queen Regent, and began to rule Portugal together with her favorite count Andeiro. Leonora was completely dependent on the Castilian court, and her lover was of Spanish origin, which meant that Portugal lost its sovereignty. The new rulers were extremely unpopular with both the people and the nobility, so in April 1385 Andeiro was assassinated, and the Cortes proclaimed king Juan I, the illegitimate son of Pedro I of Portugal. In June, Juan of Castile, at the head of a 25,000-strong army, invaded Portugal to regain control of the country. The Portuguese decided to stop the Castilians in the area of Leiria, in the town of Aljubarotta, but were able to put only 6 thousand fighters. Only a miracle could help to win with such a balance of forces, so Juan I vowed to build a monastery in the name of the virgin Mary in case of victory. Thanks to a well chosen location and tactics the Castilians were defeated and fled. 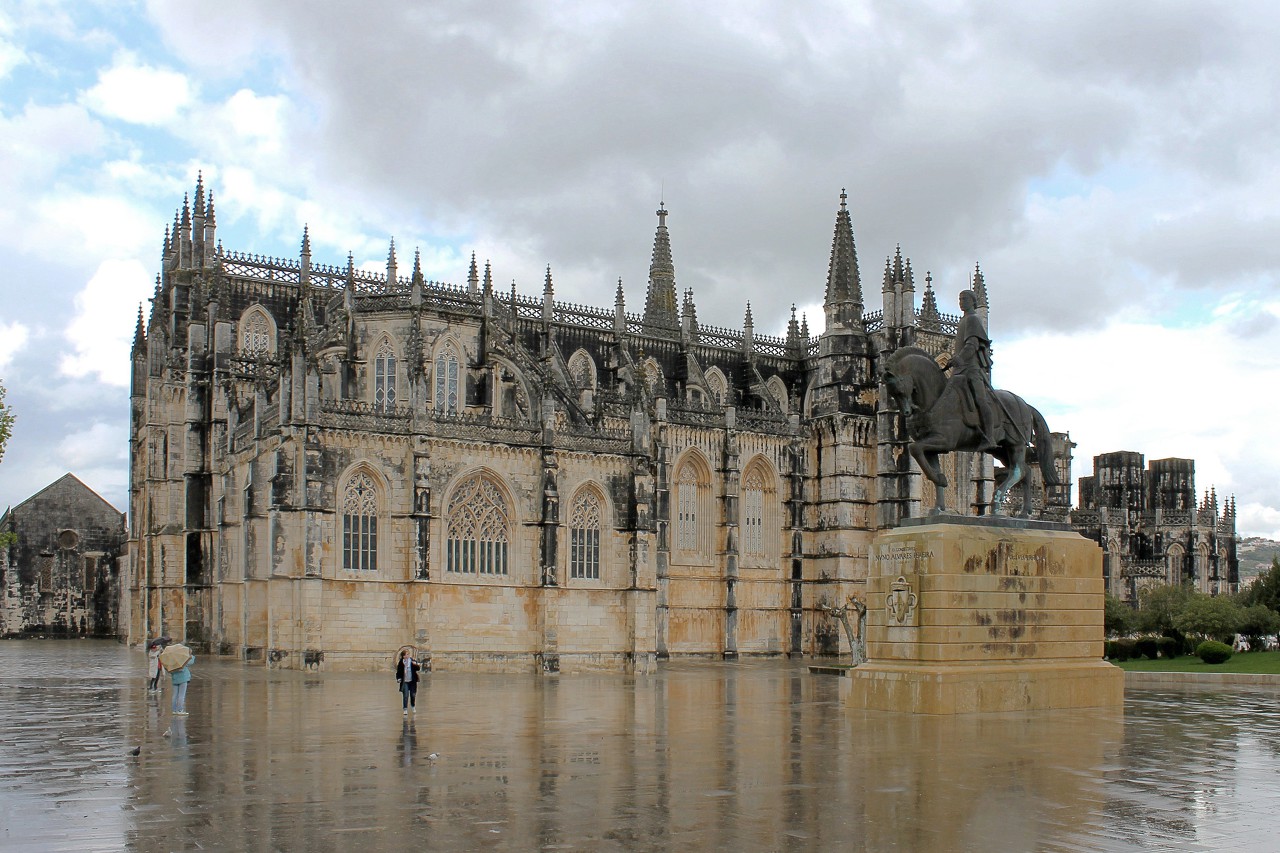 The King fulfilled his promise, land was allocated to the Dominican order near the site of the battle, and construction began in 1386, which lasted almost a century and a half. Over time, the construction site was referred to briefly as Batalha ("battle"). During the construction, seven kings (six of them are buried here) and 15 architects called Mestre das Obras da Batalha ( masters of the construction of Batalia) were replaced . The monastery was illuminated in 1504. After that, the work continued , but in 1517 all funds were transferred to the construction of the Royal monastery in Belen. 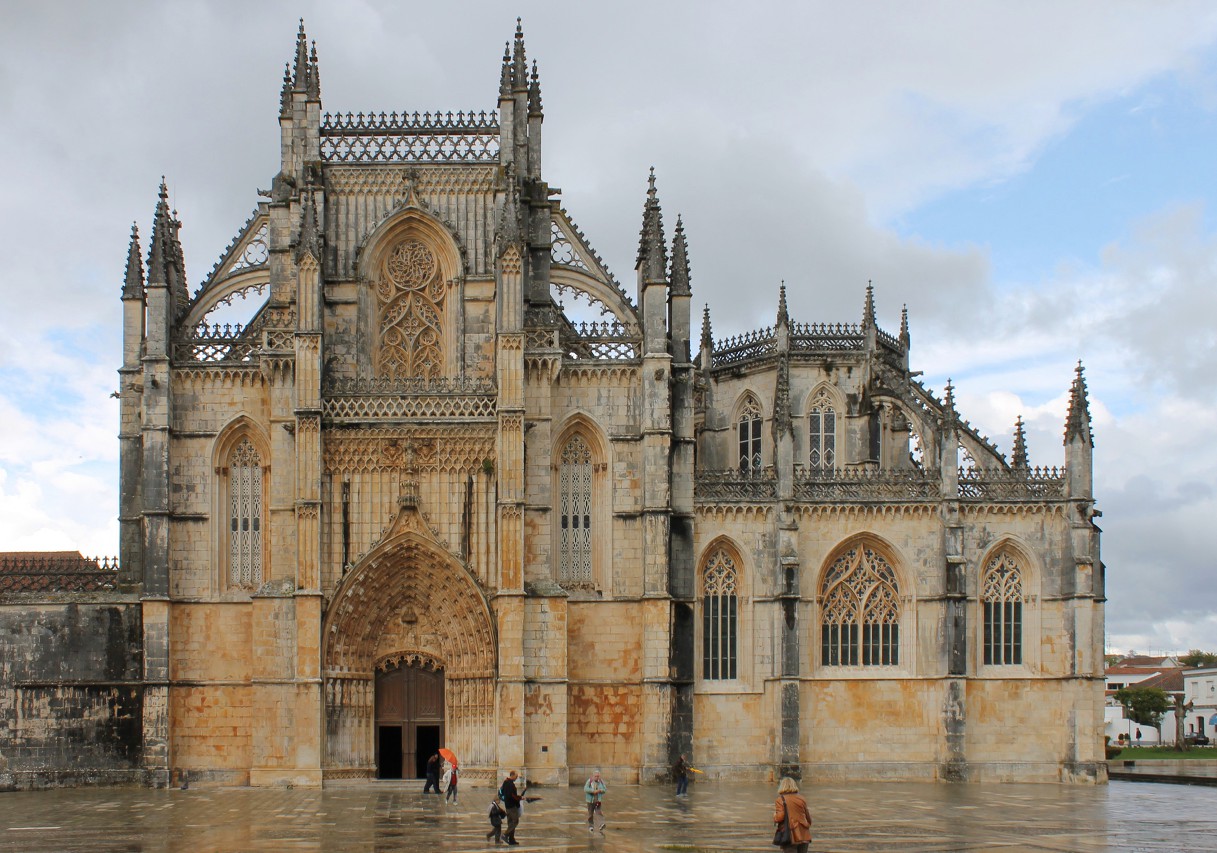 The architectural style was based on "French Gothic" (Rayonnant), but was influenced by the English school, the facade has the features of York Cathedral. 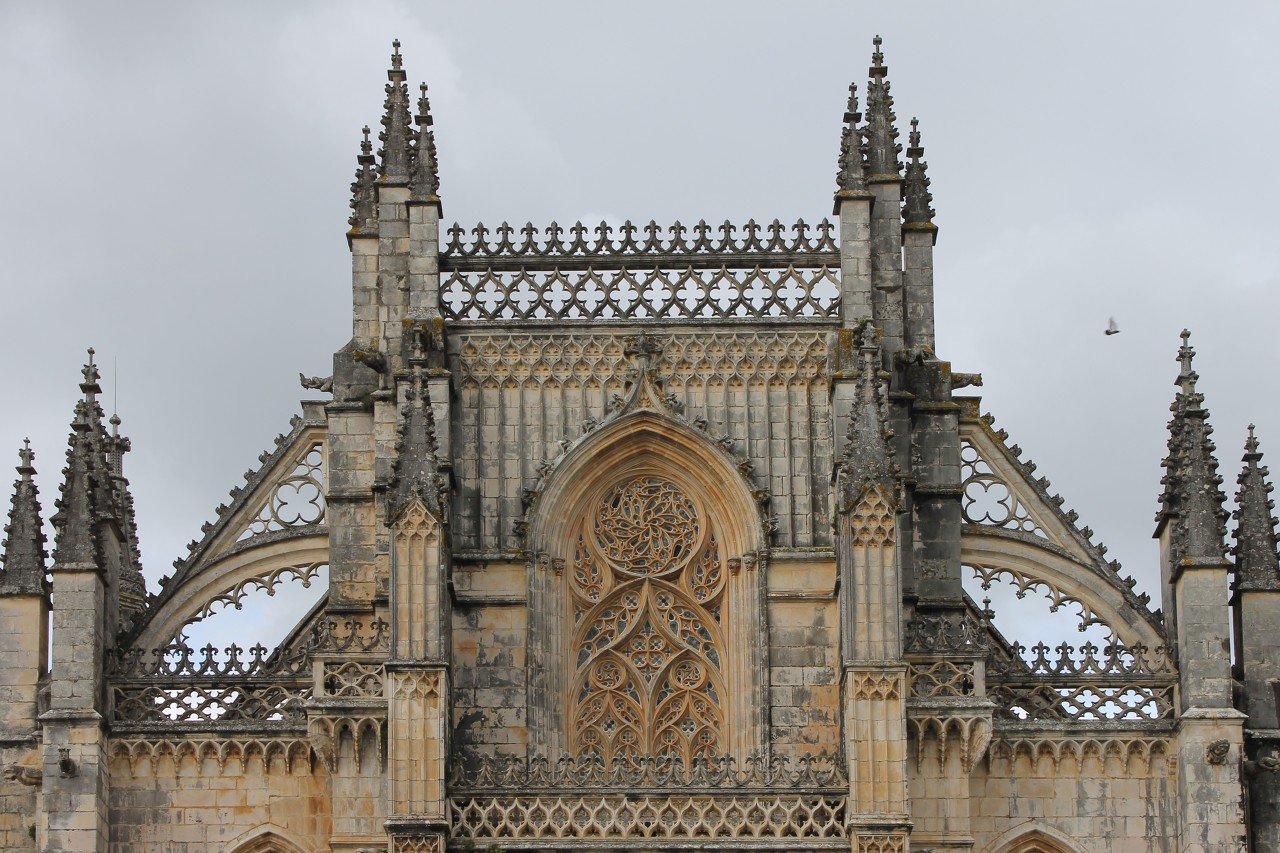 The earthquake of 1755 did not cause much damage to the buildings , but half a century later the monastery was invaded by the troops of Napoleon's Marshal Massena, who looted and burned part of the premises in 1810-1811. 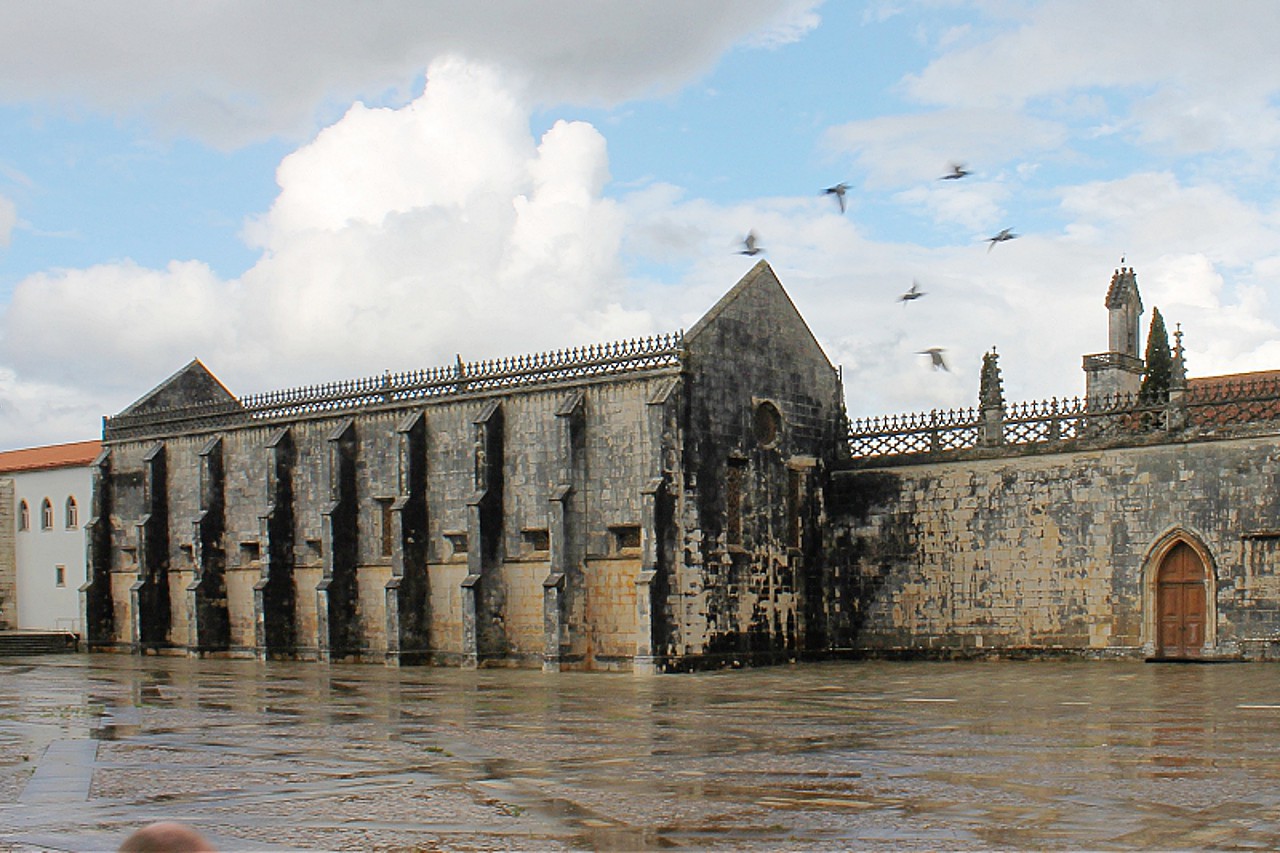 After the bourgeois revolution of 1920, the Church was separated from the state and the monasteries ceased to receive funding, and later were abolished altogether. In 1834 the monks were expelled and the huge complex of buildings was abandoned. 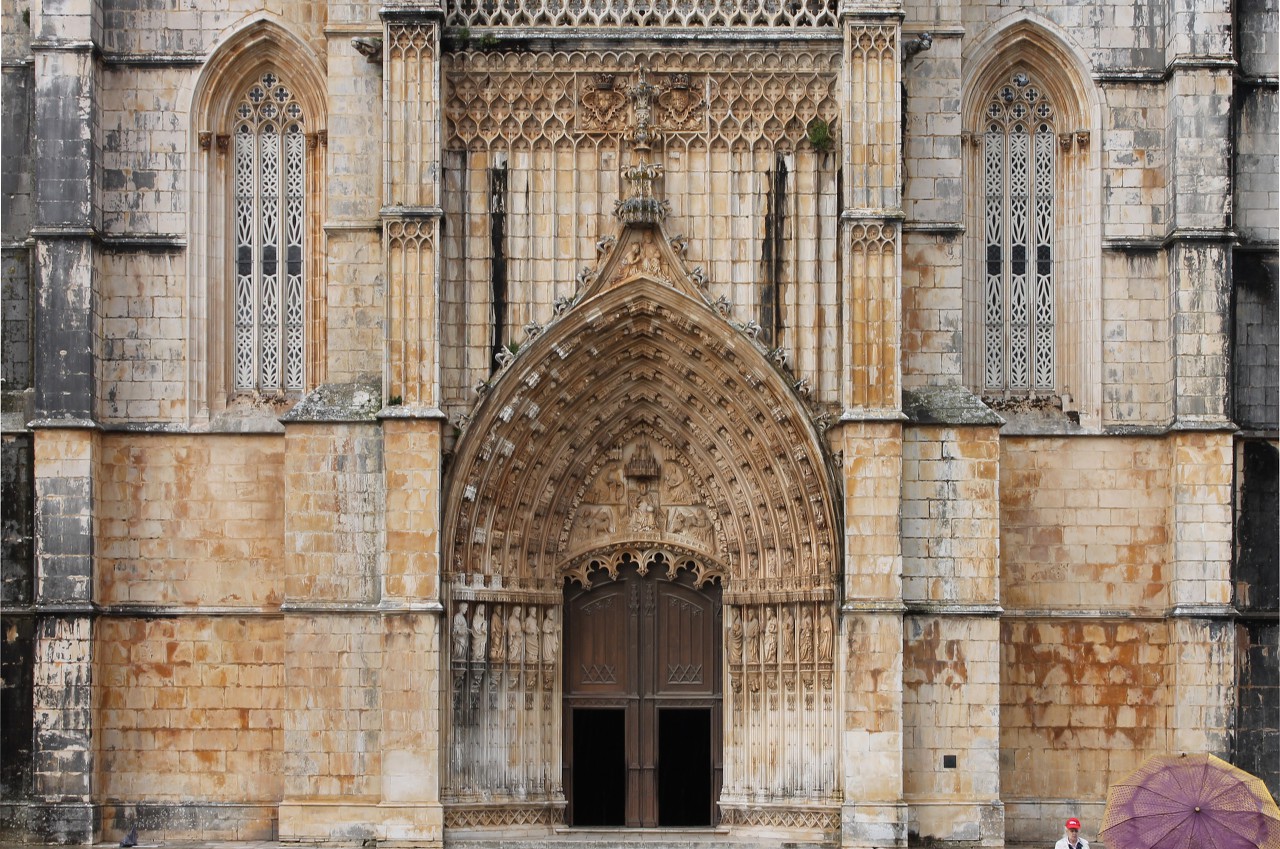 In 1840, king Ferdinand II ordered the restoration of the crumbling monastery to preserve this gem of Gothic architecture. Restoration continued until the beginning of the 20th century. 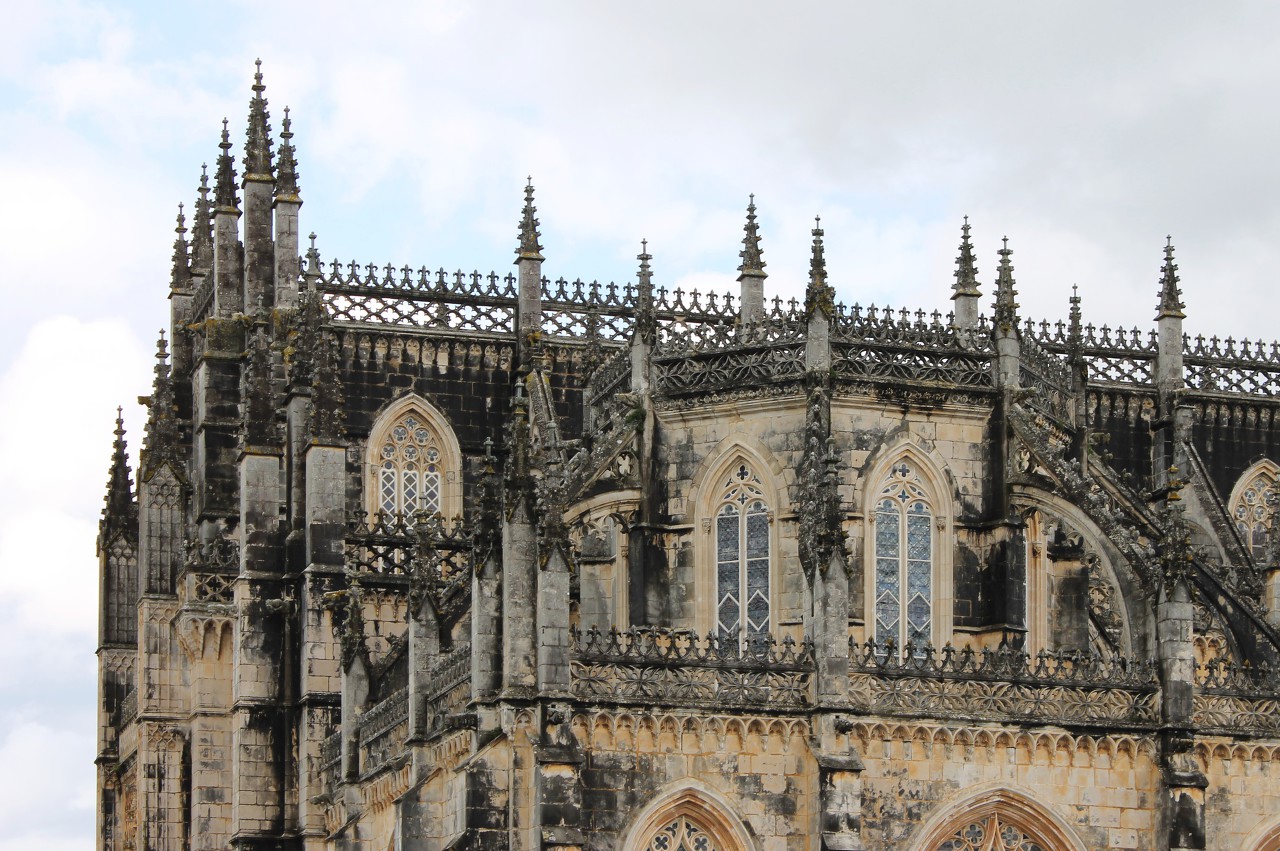 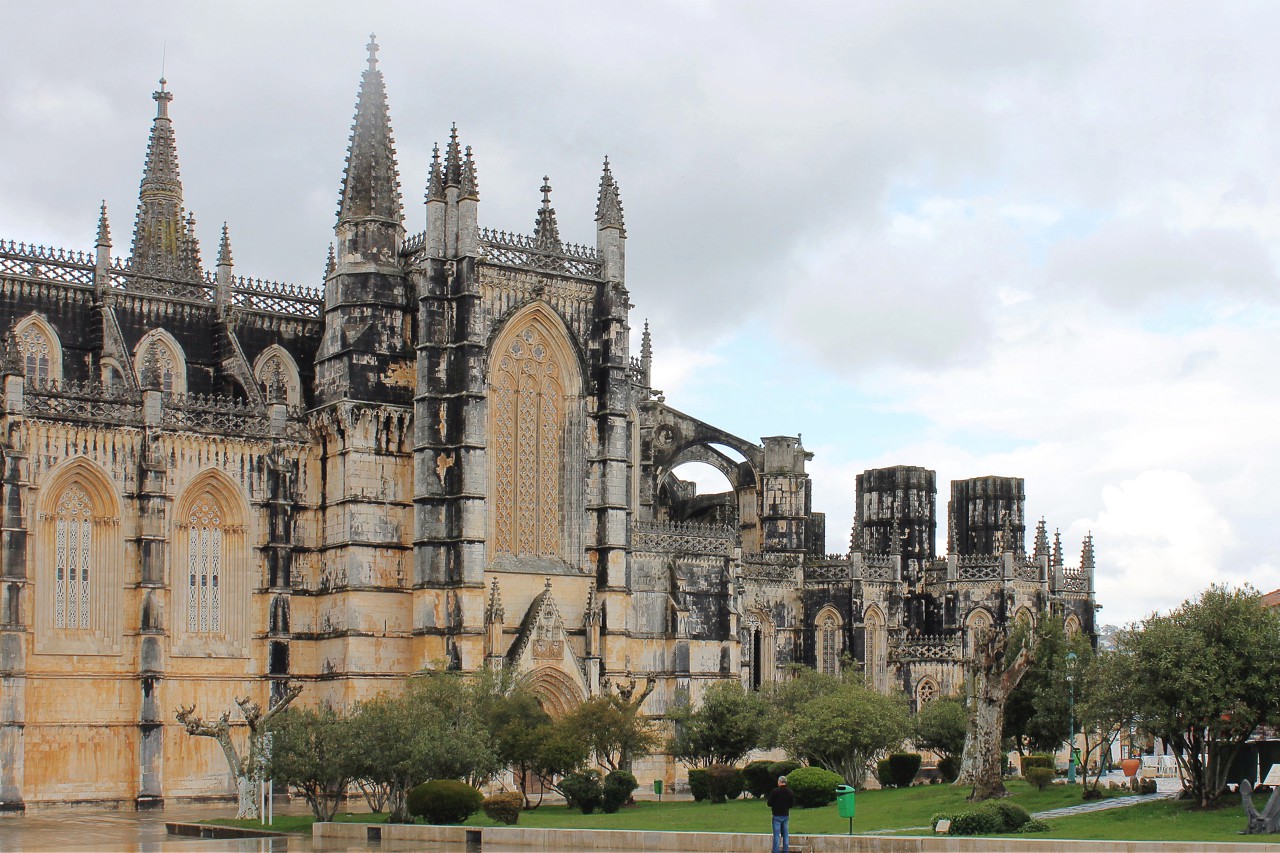 On the square in front of the monastery is a monument to Alvares Pereira (Nuno De Santa Maria Álvares Pereira, 1360-1431), who commanded the Portuguese troops at the battle of Aljubarrota and became a national hero-liberator from Spanish rule. 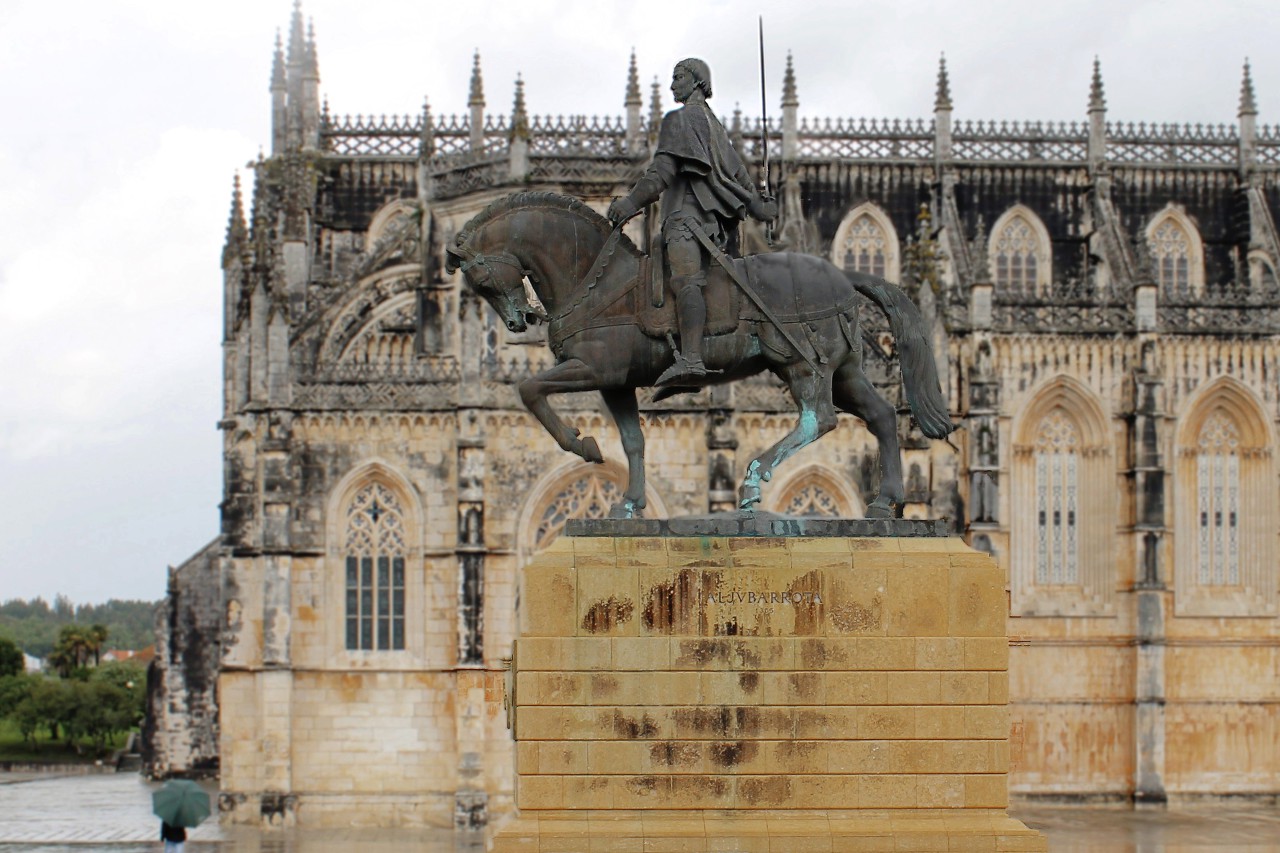